Sorry I have not been posting much throughout the week, there has not been a ton happening recently in the Zwift world but I have gotten word that Zwift will be releasing some \”Very cool things coming very soon.\” Could this be a new world? Zwift should be releasing an update soon containing the Zipp 353 wheels and some workout content. The Zipp 353s are supposedly going to be unlocked during this weekends Zipp Spring Classics rides! This weeks weekly update contains the usual news, quick zwift tip, and a dive into a cool feature called Boost Mode.

This week Zwift announced some new stuff to ensure that there is less cyber bullying, to try to prevent people from having eating disorders(eating less to lose weight), they have also reduced the weigh in time to 2 hours pre race. This has upset many Zwifters. Many Zwifters are getting upset because they are removing weight and height from Zwift companion and Zwift power. Weight can still be calculated by dividing watts by wpk. Height can not be verified now by Zwifters, leaving Zwifters no way to report cheaters with formal evidence.

The final stage of Tour of Watopia is here! Here is the last chance to grab some more extra XP and the final kit unlock from Tour of Watopia! Remember this event only comes once a year so make the most of it! There will be makeup stages for 5 days once stage 5 finishes up on Friday or Saturday. The routes for stage 5 are Mountain 8, Three sisters, and Road to sky for women only.

This week we will be all about Zwifts boost mode feature. Zwift is not currently testing any boost mode rides which should mean it will be released to the public sometime soon. During the boost mode rides you could charge up your boost and have Zwift subtract a certain number of watts and add some weight to you, then once it is fully charged depending on which boost you chose you could add up to 150 watts to your current power. The boosts are very helpful if you time them right and make sure that you don\’t get dropped from the pack while charging up the boost because it subtracts a significant amount of watts. 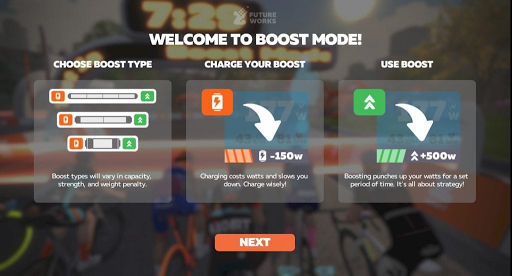 This weeks quick Zwift tip is around using your powerups. Every time you go under an arch/banner in Zwift, you get a powerup, there are a few different ones that are for free riding, the Aero, the Truck, the Feather, and the mini plus. The most effective powerup is the Aero powerup and will help you improve your times significantly on Sprint segments, the second most effect is the feather which reduces your weight by a little bit. The truck makes it easier to draft so you can lower your power and rest for a bit. The mini plus is probably the most useless one because all it does is give you 10xp, the mega plus gives you 250xp. The best place to use the Aero is on a sprint segment of a finishing sprint of a race. The feather will be most effective on a short steep climb. Recently in Zwift Racing League, a lot of riders got to try out the steam roller which is an event only powerup that makes gravel like normal tarmac. This powerup was extremely effective during the race.

This week I probably had my best ever Zwift race sprint off, I ended up getting 3rd against some really strong sprinters and I don\’t think I could have done much better, the rest of the team did amazing too! Grabbing some sprint and finishing points. I also raced B with a pretty big group of over 20 riders and finished 12th which is pretty good, the pace was very high with surges on every single KOM.